The Origin of The 'Kimura' Lock

We all know this lock. We all have been caught with it or used it. And we all know someone who’s really good at using it. Of course, I’m talking about the ‘Kimura’ lock.

It’s not only a rather well working submission, but also a good way of controlling your opponent and transitioning between positions. It’s also usually one of the first locks a Jiu Jitsu beginner learns within the first few months of training. 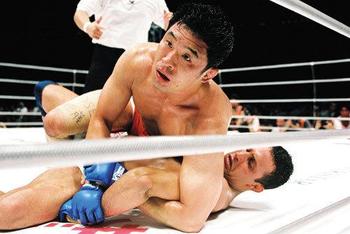 Briefly put, the ‘Kimura’ is a shoulder lock that, through isolating and controlling a person’s shoulder and elbow, applies leverage to, mainly, the shoulder joint.

Lately, famous Jiu Jitsu players and coaches such as Vagner Rocha and John Danaher have been very successful with implementing the ‘Kimura’ lock in their already impressive arsenal of techniques.

The ‘Kimura’ lock is a technique that is used in many different styles of grappling. In catch wrestling, it’s called the ‘double wrist lock’ (quite a confusing name for Jiu Jitsu players) and in Judo it’s called ‘(gyaku=reverse) ude-garami’. Which discipline had the lock first is, however, not known.

In Brazilian Jiu Jitsu, the lock is named after the Japanese judoka Masahiko Kimura, who is widely considered to have been the best judoka of his generation (born in 1917).

When Masahiko Kimura came to Brazil, he was challenged by the Gracies but refused. This led to Helio Gracie fighting one of Kimura’s companions, Yukio Kato. Helio Gracie and Yukio Kato actually fought twice. The first match ended in a draw and the second match ended via submission applied by Helio. After this win, Kimura accepted the challenge.

Helio Gracie and Masahiko Kimura fought on October 23, 1951 in a match with three ten minute rounds. Kimura defeated Helio Gracie early in the second round by way of, what was then known as, ‘(gyaku=reverse) ude-garami’. From that day onwards, the lock was referred to as the ‘Kimura’ in Brazilian Jiu Jitsu.

The name ‘Kimura’ is only used in Brazilian Jiu Jitsu. But the lock is actually named after the legendary Japanese judoka and fighter Masahiko Kimura who matched up against and defeated Helio Gracie in 1951.